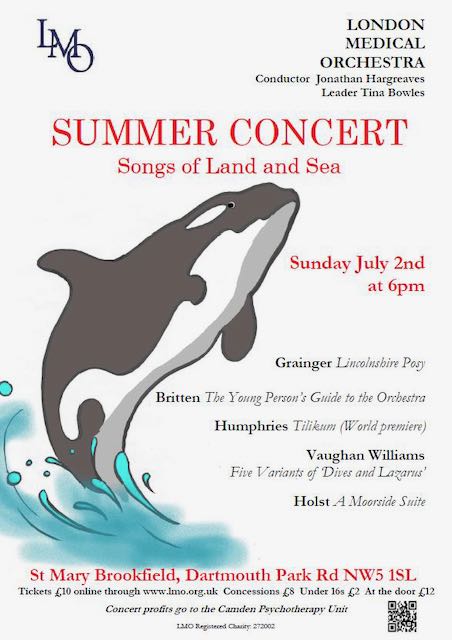 In support of the Camden Psychotherapy Unit www.cpu-london.com Registered Charity 112967

This suite was composed for brass band and was the result of a competition commission for the BBC and National Brass Band Festival Committee of 1927. The 1952 arrangement for symphony orchestra is by Gordon Jacob, and is in three movements. The darting rhythm of the first movement has something of an intellectual game. The Nocturne of the second is warm and lyrical while the final March is triumphant.

Martin, who studied composing at Cardiff, Southampton and Bath Universities, was selected to write this work under the Adopt a Composer Scheme run by Making Music in partnership with Sound and Music and BBC Radio 3, who made a recording of this live performance.

The music describes the life of Tilikum, the orca whale who died this year in captivity aged 34. He achieved celebrity for his involvement in the death of three people, and the subsequent upheaval of public perception towards captive display whales in theme parks.

The work is in five sections. 'Whitewash' depicts the open sea and the capture of the two year old calf. 'Showtime' presents the theme park show in all its glossy spendour. Then there is the first attack. 'Sonar Lament' explores the futile attempt of captive whales to connect through long-range sonar, which in the confines of a tank is thought to lead to pyschosis. Another attack follows. The repetitive circling behaviours of captive whales is explored in 'Pent Up', before climaxing in a final, brutal attack which took place before a crowd at SeaWorld, Florida. 'Blackfish', the final section, returns to the oceanic material of the opening, albeit transformed into a sterilised and chlorinated rendition.

Considered his masterpiece, this work is an arrangement of English folksongs collected by the Australian-born composer on a visit to Lincolnshire in 1906. It was written for wind band and first performed in 1937 after Grainger became an American citizen. Grainger intended that each song should express 'a musical protrait of the singer's personality... his habits of song, his regular or irrelgular wonts of rhythm'. Grainger dedicated his 'bunch of wildflowers' to 'the old folksingers who sang so sweetly to me'.

The composer wrote this piece for the World's Fair in New York. It is based on an old British folk tune which he later arranged as the hymn Kingsfold. The story is from St. Luke's gospel about Dives (the rich man) who ignored the pleading of the beggar Lazarus who lay at his gate. After their deaths, Lazarus was received into heaven and the rich man had to beg from hell only for Abraham to refuse to save him. The six segments contain sumptuous string writing with sweeping melodies and rich harmonies.

The piece, composed in 1945, was originally commissioned for an educational documentary film called 'Instruments of the Orchestra'. It carries the subtitle 'Variations and Fugue on a Theme of Purcell' based on a 17th century hornpipe melody. The theme is initially played by the entire orchestra and then by each group of instruments, moving from high to low displaying their range and texture - first the woodwinds, then the brass, then the strings and finally the percussion. Then the orchetsra is reassembled for the fugue.

CPU ( www.cpu-london.com Registered Charity No. 1112967) offers free and low fee psychoanalytic psychotherapy, on a short and long term basis, to people facing emotional distress and personal difficulties. The unit provides treatment to over a hundred and thirty people annually. The service is available to people across London from all backgrounds. Referrals may be m,ade by professionals or people may refer themselves directly to CPU. Until 2010 CPU was fully funded by the NHS, when funding was totally withdrawn. Since then it has managed to continue its work only as a result of vigorous fundraising.