In aid of Sarcoma UK https://sarcoma.org.uk

Saint-Saens was one of the leading French composers of the Romantic era, famous for his concertos on a variety of instruments, including the cello concerto which he wrote in 1872. He was an infant prodigy, making his concert debut at the age of 10. He began his professional career playing the organ, but later broke out to become a freelance pianist and composer, much in demand in Europe and North America. Although a writer in the classical style, he brought a colour and vigour to his music which marked him as a worthy successor to the great Romantic school of Schumman and Liszt. He once said: 'Compositions spring from my pen as easily as apples grow upon a tree'.

Saint-Saens wrote the Cello Concerto No 1 at the age of 37. The piece, in three movementss, was described by Rachmaninov, this concert's other composer, as possibly the greatest of all concertos for the instrument. The first movement introduces the cello swiftly and leads into a brisk dialogue with the orchestra, with some reflective moments. The second movement is a gentle minuet in which the cello has a yearning theme. The high speed final movement is one of the most difficult pieces in the cello repertoire. After a fiery start, there are moments of calm before the piece winds up for a triumphant finale.

Rachmaninov's Symphony No 2 premiered in 1908 under the baton of Rachmaninov himself. At the time, Rachmaninov was unconvinced that he was a gifted symphonist as he had suffered serious depression following the harsh reviews of the 1897 premiere of his Symphony No 1. The writing of the Symphony No 2 was a long agonised process but its triumphant success restored Rachmaninov's sense of self-worth.

The symphony, in four movements, lasts approximately 60 minutes. The first movement is in sonata form. It begins slowly with a low string theme which becomes the main violin melody and provides the majestic opening to the symphony. This is followed by a brilliantly orchestrated scherzo that makes way for a broad melody of Russian lushness.

The third movement opens with a sighing vioin gesture leading into a generous, circling clarinet melody. At the end, the clarinet and violins exchange roles. This is a movement full of yearning and heartbreak sinking to a spacious and quiet close. The finale begins with a festive, dancing music. The development section peaks with passages of descending scales, cascading at different speeds from different heights, like a pealing of bells. Rachmaninov reintroduces the melody in octaves, to sweep in the final bars. 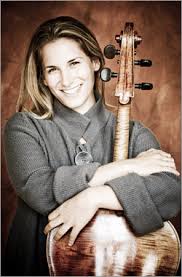 Gemma made ger concerto debut at the age of 16 playing the Saint-Saens Cello Concerto No 1 with the Norweigan Radio Symphony Orchestra, a performance for which she won first prize in the European Music for Youth Competition in Oslo.

Described by The Strad in her 2003 Wigmore Hall debut as 'a mesmerising musical treasure', Gemma is now one of the UKs leading cello soloists, giving numerous international concerts.  She recently returned from Tallinn, where she played the Dvorak Cello Concerto with the Estonian National Orchestra and Vello Pähn. In May, she performed the Elgar Cello Concerto at the Royal Festival Hall with the Philharmonia Orchestra and Christopher Warren-Green.

Gemma gives some 50 performances a year as cellist of Ensemble 360. She is also a member of the Leonore Piano Trio, with whom she recently toured Italy and New Zealand. She plays on a cello made in Naples in 1704 by Alessandro Gagliano, formerly owned and played by the Prince Regent.

You can find out more about Gemma here: www.gemma-rosefield.co.uk

www.sarcoma.org.uk Registered Charity No 1139869
Sarcomas are cancers that develop in the muscle, bone, nerves, cartilage, tendons, blood vessels and the fatty and fibrous tissues. They can occur at any age and make up about 1% of all cancer diagnoses, but 15% of all childhood cancers.

Sarcoma UK help raise awareness of this relatively rare condition. Donations support people affected by sarcoma and promote research into treatment.  It is Gemma Rosefields's request that Sarcoma UK is the designated charity for this concert.