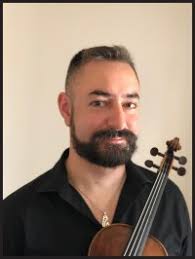 Gavin was born in North London and lives in Southgate. He studied the violin with Marta Eitler and Jaroslav Vanacek, and later with Natasha Boyarsky at the Royal College of Music, where he was awarded the Royal Orchestral Society Scholarship.

Tombeau, a musical term popular from the 17th century, means 'a piece written as a memorial'. It is thought the work was intended to evoke the musician François Couperin (1668 - 1773), though Ravel stated his intention was to pay homage to the baroque French style. Le Tombeau de Couperin was written in 1914 as a suite of piano pieces imitating the baroque dance suite, and it was first performed on the piano in 1919. Each movement was dedicated to a friend who died in the First World War.

Ravel the orchestrated four of the dances in 1919, and these are:

'Tzigane, the Devil and Faust'
It was at a private performance in Holland Park of his 1922 Duo Sonata that Ravel was inspried to create 'Tzigane' for the virtuoso Jelly D'Arányi as a distraction from his stalling Violin Sonata. At the after-party, Ravel, thrilled by her (two-hour) gypsy improvisation, impulsively promised a concert-piece, confiding to his host 'its diaboolic difficulty will recreate the Hungary of my dreams'. But Tzigane's bravura pastiche only masked the composer's fear of the writer's block haunting him after the horrors of WW1, its demonic virtuosity alluding to Faust's Mephistophelian pact.

Ravels' 'Hungarian Dream' is a startlingly realistic recreation of a 'csárdás', opening with a violin improvisation ('lassú') on a motif of Ravel's Kodály-inspired Duo, swiftly chased by an allegro finale ('friss'). In this orchestral version Ravel fully explored the folk 'verbunkos' sound (army bands that recruited in taverns) featuring clarinet, hurdy-gurdy writing for violin, and harp imitating the cimbalom. The spectacular harp 'reveal' linking into the 'friss' again recalls Liszt (the closing harp cadenza of the Mephisto Waltz) and is an ironic relic of another rash promise made in 1923 - of a never-completed Ravel harp concerto.

An English composer, Vaughan Williams was strongly influenced by Tudor music and English folk song. He was among the first to travel into the countryside to collect folk songs and carols from singers, notating them for future generations.

This short work, called a Romance for Violin and Small Orchestra, was written in 1914. In its gentle lyricism, it seems to capture the tranquility of those languid summer days before the outbreak of war. The song of the lark radiates through the air as the bird itself hangs suspended somewhere overhead. The skylark is a small brown bird of open farmlands and heath; the male advertises himself through song, ascending to high altitude and making long song flights to attract a mate and warn off rivals.

Born in New York, the child of Russian emigrés, Copland was a composer , composition teacher, writer, and later a conductor.

Appalachian Spring began life in 1944 as a ballet for Martha Graham and her company, scored for just 13 instruments. In 1945 Copland re-scored it as a suite for symphony orchestra, calling the work simply, a 'Ballet for Martha', but she suggested the title 'Appalachian Spring', just before the premiere. The story takes the theme of Americans conquering a new land. Copland was inspired by the songs, dances and rituals f the American Shakers and the work ends with a series of variations on the Shaker tune 'Tis the Gift to be Simple.

The sections of the ballet are linked into a continuous whole.
Notes compiled by Mary Dentschuk

London's Air Ambulance www.londonsairambulance.co.uk Registered Charity No. 801013, is the charity that delivers an advanced trauma team to critically injured people in London. The service provides pre-hospital medical care at the scene of the incident and serves the 10 million people who live, work and travel within the M25.

Based at The Royal London Hospital and founded in 1989, the service operates 24/7, with the helicopter running in daylight hours and rapid response cars taking over at night and in adverse weather conditions.