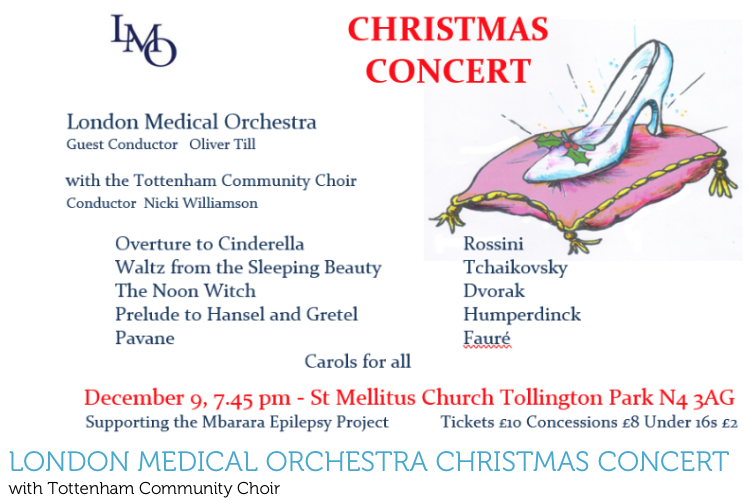 In association with the Tottenham Community Choir - Conductor Nicki Williamson

Humperdinck, a German composer, was best known for his opera based on the fairy story by the brothers Grimm about two children lost in the wood. It began as a set of songs for the composer's sister before he expanded it into a full-scale opera, first performed in 1893. It has been a great favourite ever since, particularly The Evening Prayer, the French Horn chorale which opens the prelude.

This symphonic poem was written by Dvorák in 1896 after his return to his native Bohemia. He found insporation in nationalist themes and this was one of a collection of musical settings to poems by Czech folklorist and poet Karel Jaromir Erben (1811 - 1870). The Noon Witch (Czech: Polednice) is the demon, Lady Midday, of Slavic mythology.

A mother is trying to prepare lunch, but her child is screaming for attention.  She gives him some toys to play with, but nothing helps. So the mother decides to scare the child with a story about the Noon Witch who is said to come after children if they are naughty. At that moment, the church bell rings out, announcing that it is twelve o'clock - and there in the doorway stands the Noon Witch herself. She hobbles across the parlour, her arms reaching out for the child. The mother grabs her child and then faints in shock. The father comes home and finds the mother lying on the floor, their child in her arms. He manages to revive the mother, but the child is dead.

Fauré was one of the foremost French composers of his generation. The beautiful Pavane, written in 1887, is one of his best-known works.

A pavane is a slow stately dance from the Spanish court. Fauré originally wrote this as a piano piece, then later, when engaged in Paris social life, he produced an orchestral version which he dedicated to his patron, Elisabeth, Countess Greffulhe. At her recommendation, an invisible chorus was added with lyrics contributed by her cousin, Robert de Montesquiou. They went on to produce a version with both dancers and chorus, and subsequently a ballet version, which was added to the repertoire of the Ballets Russes.

The Sleeping Beauty was Tchaikovsky's second ballet, first performed in 1890 in St Petersburg. The plot is based on a version of the fairy tale 'La Belle au bois dormant' by Charles Perrault. The ballet begins at the christening of the baby princess. Six fairies are invited, each bringing a gift for the baby. An evil fairy, Carabosse, arrives uninvited, giving the Princess a curse that on her 16th birthday she will prick her finger on a spindle and die. One good fairy has yet to give her gift, so converts the curse into a 100-year sleep.

The sleeping beauty waltz is performed by the villagers as the Princess arrives to celebrate her 16th birthday.  In this version of the story the King and Queen survuve the 100-year sleep to celebrate the Princess's wedding to the Prince.

This song was co-written in 1967 by two Americans, soul singer Otis Redding and guitarist Steve Cropper. Redding started writing the lyrics in August 1967 while staying on a houseboat in Sausalito California, as he sat watching the ships come in and watching them roll away again. This arrangement by Mac Huff has been written as a cappella (a piece without instrumental accompaniment), for mixed choir.

Rossini, an Italian composer, wrote some 39 operas as well as sacred music, songs, chamber music, and piano pieces. The opera, La Cenerentola, was premiered in January 1817 after a frantic composition period of just three weeks. Rossini recycled an overture from his earlier opera La Gazetta, and this overture has become associated with the much more successful La Cenerentola. In this version of the fairy tale the wicked stepmother is replaced by a stepfather, Don Magnifico, the fairy godmother is replaced by Alidoro, a philosopher and tutor to the prince. The overture is full of littel surprises, as befits a comic opera.

The Mbarara Epilepsy Project, is based in South West Uganda. It is a cash-poor but highly focused medical project. For the past 6 years a group of unpaid volunteers working as part of the East London NHS Foundation Trust's commitment to international health development have been working alongside colleagues in Uganda on a pilot project aimed at community education about the illness and its potential impact and remedies (making use of 'village health workers' - volunteers trained in identifying a range of problems).

Epilepsy is particularly prevalent in Uganda, a result of birth injuries and cerebral malaria. Often children with epilepsy do not receive medical help due to stigma, and there is a scarcity of trained health personnel.  The project has been hugely impactful in persuading communities that 'epilepsy can be treated' (as it says on posters and T-shirts that have been distributed), so that more children receive treatment that controls the condition, avoiding permanent brain damage.

Funds are needed urgently to maintain the supervision which encourages and supports local practitioners in their work, and to pay for the production of publication for the local volunteers, with the hope that once its efficacy has been shown over a wider area, the Ugandan government will extend the approach across other regions.